Common Moles and the risk of melanoma

What is a common mole?

A common mole is when pigment cells (melanocytes) grow in clusters on the skin.  The average adult has between 10 and 40 common moles of their bodies.  Common moles are usually found on areas that are exposed to the sun and are usually above the waist area.  You will rarely find them appearing on the scalp, breast or even the buttocks area

Some people have been born with common moles, but this is not a common occurrence.  Common moles usually only appear later on in childhood.  Common moles develop in people up until the age of 40, and thereafter the existing moles tend to fade away the older the person gets.

The common mole is not bigger than 5 millimetres wide.  Its appearance is round or oval, and has a smooth surface with a distinct edge and has a dome shape.  The common mole has an even colour of pink, tan or brown.  People who have a lighter complexion usually have moles lighter in colour than those of a person who has a darker complexion.  Below are a few pictures of common moles.*

Can a common mole turn into melanoma?

What is a Dysplastic Nevus

The size of the dysplastic nevus mole is usually larger than 5 millimetres wide.  The colour of this type of mole is a mixture between pink up to dark brown.  The appearance is usually flat, a little scaly, or it can have a pebbly surface.  The edge is irregular and fades into the surrounding skin.  Below are some picture of what it looks like.*

Can a Dysplastic Nevus turn into Melanoma?

Yes there is a possibility, but mostly they do not turn into melanoma.  Mostly they tend to stay stable over time.  Research has showed that people who have more than 5 dysplastic nevi have a greater risk of developing melanoma.

What should people do if they have a dysplastic nevus?

If you see any of the below mentioned changes please see your doctor as soon as possible.

People who have dysplastic nevi should have their doctor examine their skin.  Some doctors and people take pictures of the dysplastic mole so that it will be easier for them to see if any changes have occurred.  If you have more than 5 dysplastic nevi your doctor will want to conduct a skin exam 1 or twice a year.  If there is a history of dysplastic nevi in your family the doctor might want to see you every 3 to 6 months.

Should you have a common mole or a dysplastic mole removed by your doctor to prevent them changing to melanoma?

Melanoma begins in melanocytes and is a type of skin cancer.  It is very dangerous as is can spread to nearby skin tissue as well as to the organs such as the lungs, and liver.  It can also spread to the bones and to the brain.  The earlier melanoma is detected the more successful the treatment will be.

Most melanocytes are found in the skin and therefore melanoma can occur on any skin surface.  Not only can melanoma develop from the common mole or from dysplastic nevi, it can also develop on normal skin.  Melanoma has also been known to develop in the eye, the digestive tract as well as other areas in the body.

Interestingly enough, people who are dark skinned are less likely to develop melanoma as opposed to fair skinned people.  On the rare occasion that melanoma has developed on people with dark skin, it is usually found under their fingernails, or under their toenails, on the palms of their hands or on the soles of their feet.

If an existing mole changes colour, size or texture it is usually the first signs of melanoma.  It can also appear as a new coloured area on the skin.

–          Border that is irregular:   the edges of the mole are ragged, notched or can even have a blurred outline.  The pigment also tends to spread into the surrounding skin.

–          Diameter:  there is usually an increase in the size of the mole.  Melanomas are usually bigger than 6 millimetres wide.

Melanoma can appear differently in each individual.  Some people will have all the ABCDE features, while others may only have one or two.  Below are some pictures of some types of melanoma.*

In advanced cases of melanoma the appearance of the mole changes.  The surface of the mole could break down and look scraped; it could also become lumpy and even hard.  The mole may even start bleeding and oozing.  There might be some itching, tenderness and it might even be painful.

How is Melanoma diagnosed?

This is a fairly quick and simple procedure that can be done in the doctor’s office, a clinic and in a hospital.  The doctor will remove all or part of the skin that seems abnormal, and will have it sent to a lab for testing. The pathologist in the lab will then examine the skin under a microscope to check for melanoma. 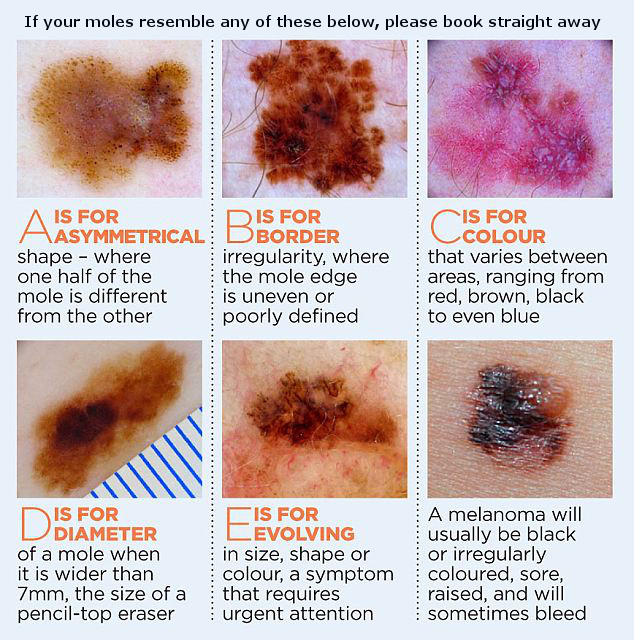